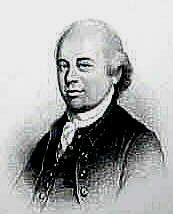 Patriot Colonel John Banister was born on December 26, 1734, the son of Captain John Banister and his wife, Wilmouth, at Hatcher's Run in Bristol Parish. Banister was sent to England for a proper education and was admitted as a barrister to the Middle Temple in London on September 29, 1753. He married Elizabeth Munford in 1755; she died in 1770. Sometime between 1760 and 1762, he erected an Italianate mansion on part of the Jones tract in Petersburg that he inherited from his mother. The new house was named Battersea after a suburb on the south side of the Thames River in England. In 1762, Banister was appointed as a trustee for Petersburg. Two years later, he was elected to the vestry of Bristol Parish. He was also a representative from Dinwiddie County in the House of Burgesses from 1765 to 1769 and again from 1772 to 1775.

After Elizabeth's death in 1770, Banister married Elizabeth (Patsy) Bland, daughter of Theoderick Bland of Cawsons. Their three sons, Robert, John, and Nathaniel, all died without issue. In 1771, Banister was appointed as warden for Old Blandford Church. He served as president of the Petersburg Jockey Club in the 1770s. In addition to his military duties, this patriot was a member of the House of Delegates from 1776 to 1778, and again from 1781 to 1784. He was a member of the first five Virginia Revolutionary conventions. Lieutenant Colonel Banister fought with the American forces under General von Steuben. He was active in the Virginia Line during the invasion of Virginia by Benedict Arnold and General William Phillips, and served as Commander of the Virginia militia under Brigadier-General Lawson in the attack against Petersburg led by General Phillips on April 24, 1781.

Colonel Banister was elected to the Continental Congress from March 1778 to September 1779, and he was appointed to the Committee of Arrangements for the Continental army. John Banister also subscribed to the "Articles of Confederation of Perpetual Union," the first step toward the founding of the United States of America, on July 8, 1778. In September that same year, Banister visited General George Washington's headquarters in White Plains, New York. Returning home, this patriot shared his wealth in support of the American war effort. His holdings included the Hatcher's Run Plantation, Whitehall Plantation adjoining Blanford town on the east, Battersea, and mills erected on the Appomattox River. The war effort took repeated and heavy tolls on Colonel Banister's vast holdings. The British mutilated his house, devastated the furnishings, and damaged or stole other property valued at thousands of pounds.

On February 26, 1779, Colonel Banister married Anne (Nancy) Blair of Williamsburg. She was born in May 1746, the seventh child of John and Mary Monro Blair. Her father was president of the Virginia Colonial Council. Their two sons were Theodorick Blair and John Monro Banister. The younger son married Mary Burton Bowling. Their son John later migrated to Alabama.

During the brief years of his life following the Revolution, Colonel Banister was appointed Petersburg's first mayor in 1785. He died on September 30, 1788, at Battersea, and was buried at the family estate, Hatcher's Run, near Petersburg. Unfortunately, John Banister did not live long enough to see America develop into the great nation it became, due in no small part to the fruits of his many sacrifices. A tribute by his great grandson reads, "With sword, purse, and pen, in the House of Burgesses, in the field, and in Congress, he did all in his power for the cause of Liberty."